As we move along in my social groups, I’ve loved the opportunity to incorporate games I’ve made up to play using the social thinking vocabulary, such as my Ned’s Head game. When the folks from Social Thinking offered me another product for review, I snagged an official game! Should I or Shouldn’t I is a game intended for middle school and high school students. 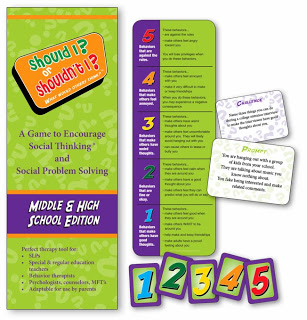 “The Should I or Shouldn’t I? What Would Others Think? ™ game encourages players to think about their own behavior choices and then compare how their perceptions match (or don’t) those of the other players. It revolves around the idea of perspective taking – being able to think about others, their thoughts, feelings, and behaviors, and how this interrelationship plays out in social situations. The game is based on the Social Thinking concepts and vocabulary introduced by Michelle Garcia Winner and outlined in her many books and articles on the topic.” 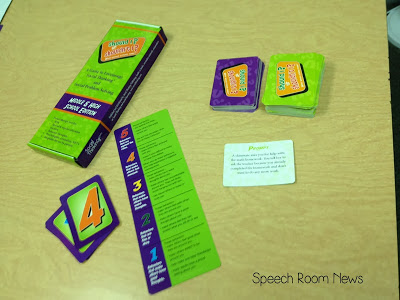 Each player gets a 5 point scale and 5 voting cards that are labeled 1-5. On each turn student will draw a Prompt or Challenge card. 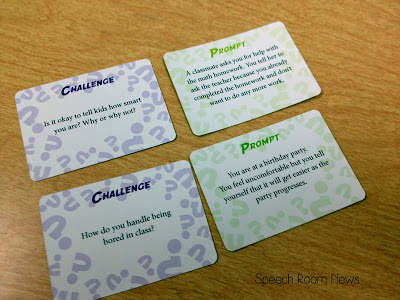 The cards provide situations that are relevant to teens. The group members each vote on the behavior and discuss how they each voted. 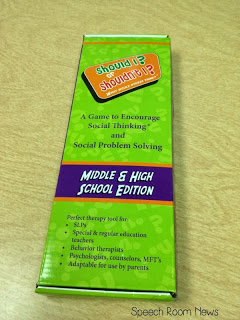 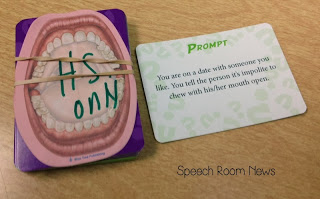 If you’re playing with middle school or some high school students, you’ll want to go through the cards before playing and take out an cards that wouldn’t be appropriate for your students. Since I only play with 6th-8th graders, I removed all the dating cards. I did leave the ‘texting’ opposite sex cards because that’s really relevant to my middle schoolers.  Pros: The game is meant for higher functioning social skills groups which is great for busy SLPs. It’s often hard to create scenarios for discussion and I love the 5 point framework. I also used this with my cognitively delayed students who are not on the spectrum. It allowed for practice in problem solving and reasoning.  Cons: My students had some trouble with the 5 point scale in relation to the cards at first. I would love some scenarios for practice that showed the same situation with actions that qualify as each of the 5 points. For example, my students and made up a scenario about a kid spilling his lunch tray. We took the the scenario and gave examples of actions that would qualify as 1-5 points on the scale.  Should I or Shouldn’t I is currently retailing for $22 on the Social Thinking website.