A few months ago one of my guys working on social skills made a comment and then followed it up with a loud ‘FTW’. I looked over and smiled. I had to ask, “Was that a #FTW”  (FTW= ‘for the win’ in social media). He just smiled and said, ‘Yea like on Twitter.’

Soon after I finished celebrating that the social awareness it took for him to correctly use the slang/hashtags I decided to capitalize on his interest in twitter/instagram.

We ended up making a Twitter Wall. We decided to incorporate Social Thinking, The SuperFlex Curriculum and the Unthinkables in our twitter feed. This week since we were just back from Spring Break we decided to tweet about spring break. 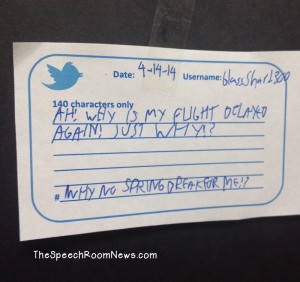 We wrote tweets that people on spring break would write. Then we decided which Unthinkable that would being invading that person’s vacation. We wrote a username that matched. The example above is @glassshard300 to represent Glass Man. Then we added hashtags. 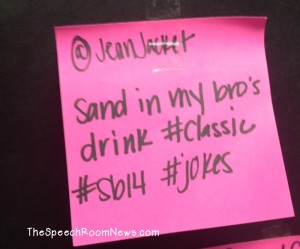 Here is one of my examples from ‘Mean Jean’. 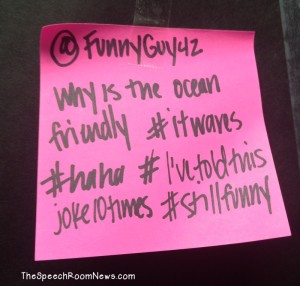 My bad beach joke from the Unthinkable ‘Was Funny Once.’

You can snag the Twitter Cards and Posters from Mrs. N’s Classroom. They are a free download. Make sure you leave her some feedback!