Several of my 4th and 5th graders are working on inferences. We started with this inferencing poster. We talked all about how we use inferences in everyday life. We role played some skits to work on social inferencing and now we’ve moved on to using comics! 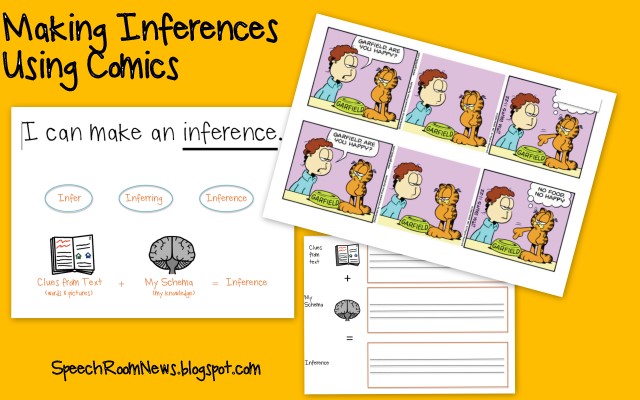 These comics are great because they are short. They deal with a lot of pictures and they engage the kids. I’m finding them to be a good step before actually working on inferencing from paragraphs or book (which give don’t provide the visuals). Although we’re explicitly working on inferencing, these activities also work on cause/effect, prediction, sequencing and figurative language. We also throw in some explanations of the humor for my students on the autism spectrum in the group. To use the comics, I start by modeling the steps several times. I model my thinking for each step. Even with modeling, it’s a pretty difficult skill for language disordered kiddos. The comics in your download are displayed twice. On one comic strip, a speech bubble is blocked off. Print both copies and glue them back to back before laminating. Instruct your student to  read the comic  and make an inference (using context clues and their schema) about what the comic could say. After they take a guess and the group discusses, flip the comic over to see the full original version. Pick up your copy HERE. If you use this activity, pass is along to a colleague, become a follower and leave a comment.