Word Retrieval is the latest app from the Virtual SpeechCenter, Inc.

“Word Retrieval was built around research on remediation of word retrieval difficulties to help children and adults organize their lexicons through activities including confrontational naming, associations, and divergent and convergent naming to improve their abilities to access already known words and increase their retrieval of words. Word Retrieval can be used for individuals with: Aphasia, Specific Language Disorder,  Learning Disorders, Cognitive Deficits, Autism and Central Auditory Processing Disorder.”

To start: Add a student, and select an activity (flashcards or game.) Read through the list of activities and select those appropriate for your student.

In the Name this Picture set, the iPad prompts the child to ‘Name this picture.’ And the clinician rates it as correct or incorrect.  The prompt can be repeated by pressing the green button at the bottom of the screen. The current accuracy is on the screen in the top right corner. 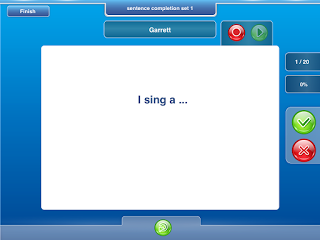 The Sentence Completion set, provides a simple sentence that the student was complete. For example, “I sing a ____.” 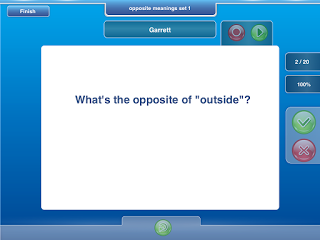 The Opposite Meanings cards ask for an antonym. For example, “What’s the opposite of outside?” 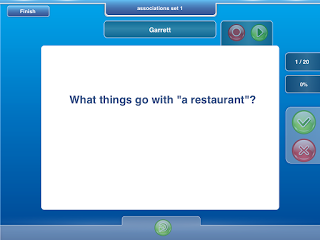 The associations set asks the user to verbalize association. For example, “What things go with a restaurant?” 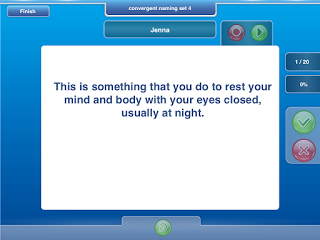 Convergent Naming, provides a set of verbal cues. For example, “This is an animals that has fur and four legs and is used for catching mice.” 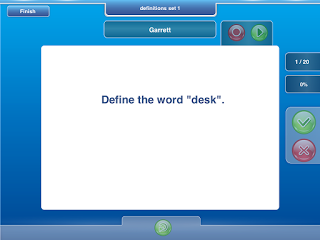 The definitions set, asks the student to give a definition. For example, ‘define the word bed.’ 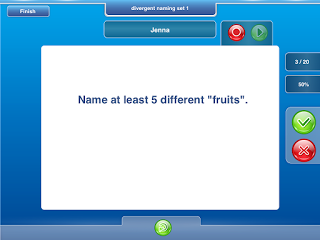 In the Game version, the game is played like Jeopardy. In theory I love this idea. But the app isn’t very well thought out in this section. The SLP selects which learning target will be targeted (ie: in the picture above I selected all of them.) The app makes you start and complete one column before moving to the next.  The problem is that although there are only 7 scoring rows (100-700), the app requires a student to answer 20 question probes in that column before moving on to another column. So students answer 100-700, then it adds a new 100-700 in that same column. That gets you up to 14/20 probes. So you get still another 100-700 before you can move to another column or probe type.  My student got really frustrated with it.  Even though they got all the point cards they couldn’t go make another choice. It would be much more appealing if the student could select any card from any column. Even if they had to do one column at a time – doing 20 is just too repetitive, when this is supposed to be the review portion of the app. In my opinion there should be just 7 prompts instead of 20.  Pros: There are a limited set of apps for this skill, so new apps are definitely needed!  Cons: If the developer indicates the app is research based, I like to see links or reference to that to research with in the app. This was missing in Word Retrieval. In the Jeopardy game, I had to play the ‘Name this Picture Set.’ with 20 prompts and not able to keep my student engaged.

I found one bug in the app, during the game play the app crashed. The developers have already submitted a fix to iTunes.  The app is available in the itunes store for $9.99.

Disclosure Statement: I was provided a copy of this app. No other compensation was provided.