I saw a new app last week and just had to try it out! Meet Tiga Talk! Tiga Talk, is a one-of-a-kind app that has been developed with licensed speech and language pathologists to help children who are in the beginning stages of speaking learn how to make  23 core phonetic sounds through playful voice-controlled games that can improve speech clarity and articulation. Tiga Talk provided me with a copy of the app to review for all of you! 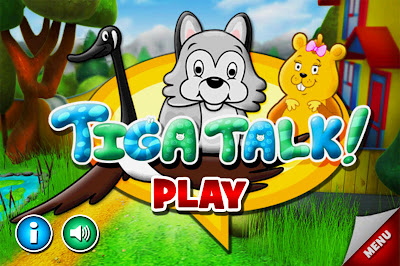 Tiga Talk encourages kids to practice their sounds in order to win games. Today I used it with a student working on the /k/ sound. She had to say her /k/ sound over and over again to move her car over the track. She was hooked! We took turns – she picked a sound to practice (anything but /k/!) and then I got to pick our game (always /k/!!!). She had so much fun and was asking to play again later in the preschool day! We played several different games, and her favorite was the /p/ sound where she got to pop balloons every time she said /p/. 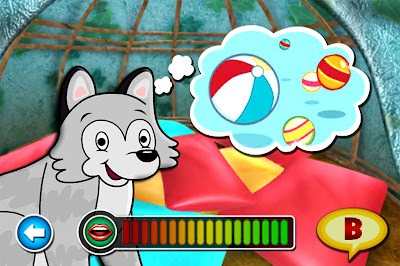 The software did a pretty nice job of recognizing sounds. In the 10 different game attempts I played today, only once did it not seem to recognize that the child was saying the sound. I had her speak up – and my instructions/voice seemed to jump start it back into action! I calibrated the mic the next time and we were back up and running! 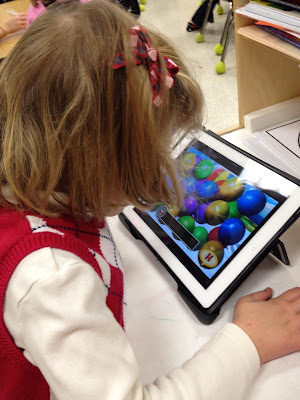 This one of my students using it this week! She was thoroughly engaged with it! If you’re expecting this app to be the SLP for you – it won’t. It can recognize that the student is making a sound, but not distinguish if they’re using it correctly or not. It acts as the motivator for getting your student to say /k/ 50 times in 5 minutes, while you help your student shape their production.  This movie is from the developer. Watch it and the others on the website to get a  feel for what using the app is like!  It would be a great app for your preschool population. This week in preschool I have used it several ways. First.. for it’s intended purpose.. sound production practice. I also used it with an child with apraxia. First we picked a sound to practice. After a few games of /p/ I changed his target from /p/ to the word POP.You can customize it to many target sounds or words! The other student I immediately knew I would use the app with is a student with very quiet speech volume. Every time they make a noise, a voice meter on the screen lights up. We practiced saying words while using our ‘loud voice’ to get it into the green portion of the meter. You can check it out here in the itunes store. Right now, it’s priced at $4.99.

« Speech & Language Valentine’s Day Apps
When should I use my Ipad in therapy? Easy Group Apps. »